So, I decided that today would be the day to bring my laptop and Oculus Rift with me and show my games to anybody who is interested. I immediately noticed people with rolling luggage, which made my decision to use a backpack seem misinformed.

So, this is Fish from upcoming game, Nuclear Throne. It took a while to figure out who he is, and I still don’t know why he’s so sad. He is green though, so I got a picture with him. 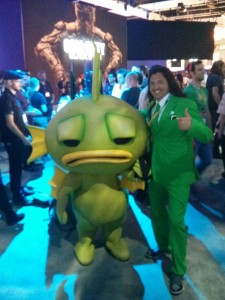 Stopped by the IndieCade booth to check out a local developer’s game: ChargeShot. I played a few rounds, and I’m pretty sure I got my butt kicked. It’s hard to say though, since I didn’t play long enough to understand how to process the chaos. Which is not to say it doesn’t make sense, I just wasn’t able to figure it out. 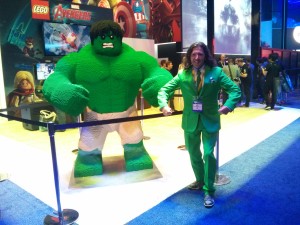 Wandered over to the GameChurch booth and grabbed a free beer. They seem to be the only company that consistently has free beer. Which makes them awesome. 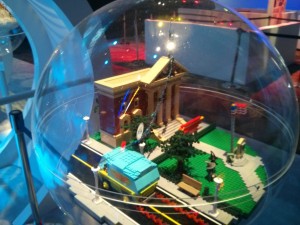 Showing My Games In The Lobby

I ran into Nate again near the bar out in the South Hall lobby. They were getting ready to head to the airport, but had some time to check out my games. So, I grabbed a table near an outlet and set up my laptop and Oculus Rift. They checked out the games, and then after they left I stayed there and showed the games to various passers-by. Pretty much anyone who expressed interest in seeing a VR demo. 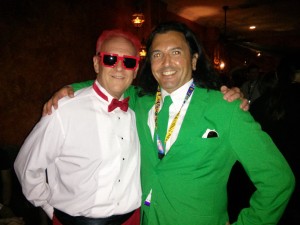 After the expo ended for the day,  I walked up a block to the Hotel Figueroa for an IGDA networking event. I met several people at the party, including a couple of people who have recently started their own companies to pursue VR products. There seems to be quite a bit of interest in this VR stuff. I also met my complementary colored pal, George, pictured to the right. Then, out of the blue, I ran into a friend that I hadn’t seen since I was at school in Pasadena about 25 years ago.

After exhausting my drink tickets, I made my way to the pool area of the hotel with Rich. There I ran into a couple people I had worked with at Atari and yet another developer at a VR startup. As I headed back to my car, a person waiting at an intersection with me noticed the Rift and asked if he could check out my games. So, we went to Starbucks and I set up the equipment and showed them off. I drove back to Costa Mesa and managed to get a few hours of sleep before the final day of E3.